Home field advantage is as much a part of college football as marching bands and drunken co-eds. LSU’s Tiger Stadium, University of Florida’s “Swamp”, Clemson’s “Death Valley” and Ohio State’s “Horseshoe” provide some of the more well-known home field advantages in all of sports.  But you don’t have to play in an 80,000 seat arena to enjoy the benefits of a home field.

There are a host of smaller venues, including some HBCU home sites, that have proven themselves very tough on opposing teams.  Granted, playing in front of your home crowd does not guarantee victory, but you have to like your chances if you play your home games in these friendly confines.

Here’s a look at the best home field advantages in the world of HBCU football.

*** O’Kelly-Riddick Stadium is a charming, picturesque venue nestled on the grounds of North Carolina Central University.  But don’t get it twisted.  Playing in O’Kelly-Riddick is no walk in the park for the opposition.  In fact, the CIAA contingent that contributed to this poll thought so much of O’Kelly-Riddick that they lobbied vehemently for Central to be included in the Top 5 home field advantage ranking and not just an honorable mention selectee.

O’Kelly-Riddick’s greatest advantage comes from the closeness of the fans.  “They’re right on top of you and in your ear the whole game” one former CIAA player told me.  He went on to describe how one of his young teammates was harassed by a particular NCCU fan from pre-game warmups until the final whistle.  No wonder that “young buck” had his worse collegiate game that day.

*** Grambling State’s home games may not be as well attended as some of the other schools on this list, but the folks that congregate at Eddie Robinson Stadium on Saturday’s sure make their presence known.  Robinson Stadium is one of the largest FCS on-campus stadium in the country.  The Tigers have enjoyed 13 undefeated home seasons and a .758 winning percentage at Robinson Stadium since it opened in 1983.

The stadium is in the middle of nowhere which in itself creates a sense of isolationism for visiting squads.  Couple that with the lore of Grambling State football, the passion of their fans, and the quality of football the G-Men play and it’s pretty simple to see why playing at Robinson Stadium has proven to be such a difficult task for opponents.

*** If there were no extra weight given for recent success, North Carolina A&T’s Aggie Stadium would have made our Top 5.

A&T fans are amongst the most passionate and rabid in all of FCS athletics. The Blue Death Valley, Aggie Pride and of course the GHOE (Greatest Homecoming on Earth {sorry Howard}) all take up residence in Aggie Stadium.  Visiting teams can expect the unpredictable at Aggie Stadium.  Just a season ago, a very good Bethune-Cookman team suffered a horrible defeat at the hands of NCA&T and were held to a putrid 5 yards of rushing offense during the process.  It’s no coincidence that game was played in Aggie Stadium.

SU vs JSU at Mumford Stadium

Yeah I know SWACOs.  One could argue that Mumford is deserving of the #1 ranking.  But like A&T, Southern’s recent hard times resulted in Mumford falling a little lower in the rankings.

SU routinely ranks in the Top 25 in FCS home attendance and unlike some HBCU fans; Jaguar fans are active and loud from the zero quarter to the fifth quarter.  The Human Jukebox, the Dancing Dolls, 20,000 plus screaming Louisianans all make Mumford a special place to call home.

South Carolina State’s Dawson Stadium is one of the best places to catch an HBCU football contest.  The fun starts outside of the stadium at the MEAC’s best tailgate party.  Inside the stadium, you will find one of the most knowledgeable and loyal group of fans in the HBCU world.

Bulldog fans know when to inject life into the stadium; and when they do Dawson produces a “roar” that is as good as any in FCS football.  Oh by the way, the Bulldogs are 19-3 at Dawson over the last 5 years.  Pretty good huh?

If you call a Rattler fan arrogant or obnoxious, you’re more likely to receive a thank you than a rebuttal.  They are a deeply loyal and passionate bunch who don’t seem to have an issue reminding us all of the rich history of FAMU athletics.   On game day they’re extremely boisterous and fully engaged.

The fans alone provide enough of a boost to give FAMU a great home field advantage.  When you add in the Florida humidity and a 400+ piece band that has its own cult following into the equation, Bragg Stadium becomes all the  more difficult to tame. 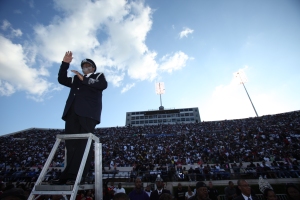 In 1997, Jackson State set an NCAA FCS attendance record when they averaged 38,873 fans at home games.  JSU fans don’t show up just to be seen either.  They are loud, rowdy, and very much a part of the game.

The Sonic Boom is a high intensity, “aggressive” band that amplifies the already hostile environment of Mississippi’s Veterans Memorial.

Between the lines, Jackson State owns a .780 winning percentage at Veterans Memorial.  Many teams cannot sustain that type of excellence for a 5 year period.  JSU has been doing it since they began playing their home games at Veterans Memorial in October of 1967.

The combination of diehard fans, an “in your face” band, and a football history that is steeped in tradition makes Veterans Memorial worthy of receiving the #2 spot in our ranking. 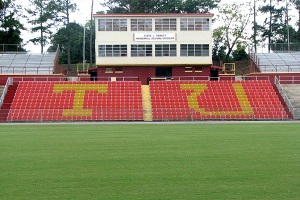 Tuskegee’s Abbott Stadium -affectionately known as “The Dust Bowl”- is one of the most unique places to play football in the country.  Abbott (originally called Alumni Stadium) was constructed in 1924 and was the first of its kind to be erected on an HBCU campus.  To give you some perspective regarding just how much history Abbott Stadium has seen, many of the Tuskegee Airmen were still running around in diapers when the Golden Tigers played their first game at Abbott against Atlanta University.  But age isn’t Abbot’s only unique characteristic.

Abbott is one of the only stadiums in the country in which the tailgate occurs inside the stadium (on the hillside). There is also a seemingly out of place barn roof (referred to as “The Shed”) standing over the home-side stands. But when you consider the stadium has no lights and that all home games kickoff at 1:00 in the afternoon, it makes sense to offer fans some sort of protection from the Alabama sun.  Players on the field are afforded no such luxury.  Not only is the playing surface hot, but the stadium’s design inhibits air from circulating freely, hence the term “The Dust Bowl”.

Tuskegee has been an absolute beast on the field.  The Golden Tigers own 8 Black College Football National Championships, 28 SIAC Championships, as well as the title of “The Winningest Team in HBCU History” with 630 victories.  More recently, Head Coach Willie Slater boasts a 25-3 home record at Abbot Stadium.

Now that you know how we feel, tell us what you think.  Choose your Top 3 HBCU home field advantages.  The poll closes the week of July 4th.

One thought on “Best HBCU Home Field Advantage–Rankings and Poll”