Hailwildcats.com will host a WILDCATS “LETS GO” Watch Party on Thursday November 6th, 2014 starting at 7 p.m. EST when our Mighty Wildcats of Bethune-Cookman University take on the Spartans of Norfolk State University on ESPNU. The game will air live on the “BIG SCREEN” of Buffalo Wild Wings at 2479 W. International Speedway Blvd  Daytona Beach, FL 32114.

If you are in the Daytona area, put on your Maroon and Gold and come out and share with the Wildcat Nation in this momentous and joyous occasion and see

“Who will ascend to the top of the mountain?”

JOIN US FOR FOOTBALL, FOOD, and FUN!

We look forward to seeing you there! Kickoff at 7:30 P.M.

Finnie had two interceptions and Jameson Wright one, and Robert Way and Korey Harris recovered fumbles for the Wildcats (6-1, 3-0 Mid-Eastern Athletic Conference).

Michael Knox ran for a 10-yard score and threw a 15-yard touchdown pass to Cantrell Frazier to lead Savannah State (0-7, 0-4).

Great news on the injury update to Korey Harris. Harris, who was carted off the field on a stretcher during Bethune-Cookman’s 49-12 Homecoming victory over Howard on Saturday, is expected to play this weekend according to head coach Brian Jenkins. 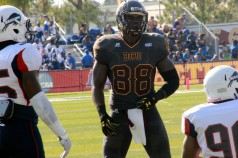 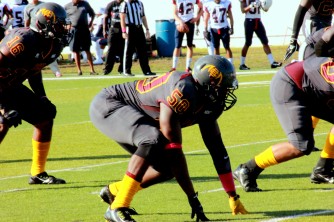 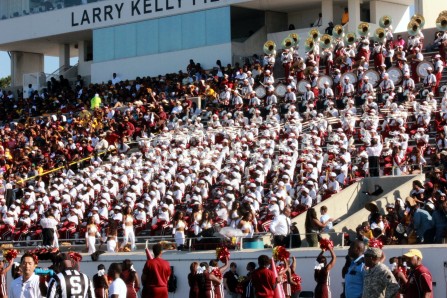 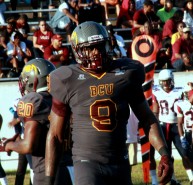 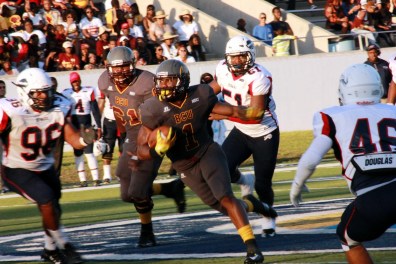 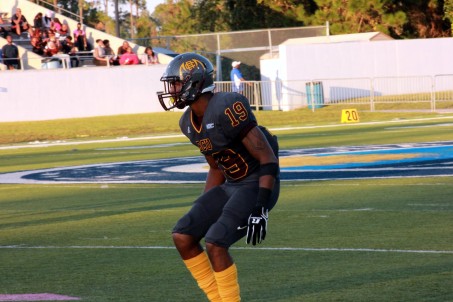 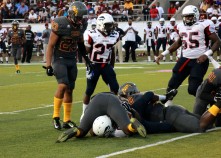 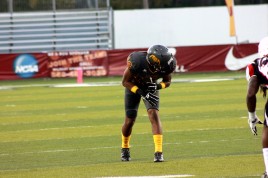 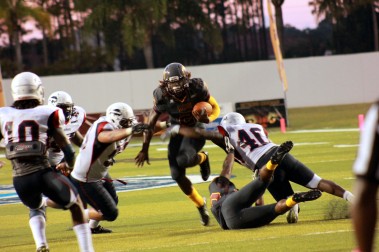 Bethune-Cookman outrushed the Howard Bison by a nearly 5:1 ratio (268 yards to 58) and secured a 49-12 Homecoming victory in front of 10,247 fans packed inside Daytona Beach’s Municipal Stadium on Saturday. Anthony Jordan led the Wildcats on the ground with 102 yards and 2 touchdowns on 11 attempts.

Jordan also contributed in the passing game and helped setup the Cat’s opening score after hooking up with Quentin Williams for a 19 and 16 yard pass and catch on the first two plays from scrimmage. Jordan capped the drive with a 3 yard touchdown run to push BCU ahead 7-0. The drive covered 75 yards and 11 plays. Williams was 4-4 for 57 yards through the air on the drive.

After a would be three and out on Howard’s ensuing possession, the penalty bug raised its ugly head when BCU extended the Bison’s drive with two consecutive encroachment penalties on 3rd down. The Bison offense capitalize on the Wildcat miscues but could only come away with a 46 yard John Fleck field goal to close the gap to 7-3.

The Wildcats took its second offensive possession the length of the field and found paydirt when Cary White raced off tackle 19 yards for BCU’s second rushing touchdown of the afternoon. The drive was sustained on the heels of a beautiful over the shoulder 30 yard grab by DeVonte Washington on 3rd down and 8 from the Howard 49 yardline.

Fleck added a second Bison field goal on Howard’s second possession this time from 31 yards out.

A 69 yard Drexler Dixon kickoff return followed by a 15 yard unsportsmanlike conduct penalty on a Howard player for participating without a helmet setup BCU with great field position at the Howard 13. Quentin Williams called his own number five plays later and scored on a 1 yard quarterback keeper to push the Wildcat lead to 21-6. The score remained the same heading into halftime.

The offensive fireworks continued in the second half when HU’s Robert Mercer returned the second half kickoff 74 yards to the BCU 23. 4 plays later, reigning MEAC Offensive Player of the year, Greg McGhee, scored on a one yard quarterback keeper to cut BCU’s lead to 21-12.

The Wildcats, not to be outdone, opened its first possession of the second half in similarly spectacular fashion. After a modest return to its own 21 yardline, Anthony Jordan scampered 79 yards for his second touchdown run on BCU’s first offensive play in the second half. Jordan’s touchdown run pushed BCU’s lead to 28-12 and was the Wildcat’s longest play from scrimmage this season.

“We got punched in the mouth (to open the second half),” B-CU coach Brian Jenkins said. “They came out with a big return off of our guys’ lackadaisical play. Then, they got it in the end zone a couple of plays later. But I tell our guys it’s not that you get punched in the mouth, it’s how you respond. And they responded.”

Quarterback Quentin Williams was a very respectable 6 for 9 passing for 114 yards through 2 and half quarters. However, Williams, who also ran for a score, was replaced by redshirt freshman quarterback Larry Brihm in the middle of the 3rd quarter.

“We had it planned to play Larry,” Jenkins said. “We think he’s an explosive player.”

Brihm finished the contest 7 for 11 passing for 58 yards and 1 touchdown.

Defensive lineman Korey Harris, who was transported off the field on a stretcher, is reported to be fine according to head coach Brian Jenkins.  “He had some numbness in the beginning but the feeling returned before he was carted off.”  Our doctors did a tremendous job of immediately addressing the issue which gives me a lot of confidence.  He was transported to the hospital for precautionary reasons but he is fine.”

Please join us for food, fun, and football at our Hailwildcats.com 2k14 Homecoming Tailgate Party Zone Spot 81 at Municipal Stadium on Saturday starting at 1 pm.

HailWildcats.com is a network of passionate alumni, students, and friends of the Great Bethune-Cookman University. It is also a huge gathering place for the BCU faithful and is intended to provide Wildcat supporters with a vein through which we can fellowship, network, keep informed, and stay involved. We are glad that you visited. We encourage you to come by our Tailgate zone and meet the staff and cheer on your Cats.

While there, for the low rate of $5.00, (click on the link below to pre-purchase your ticket) you can dine on the wonderful items listed below

Winner will be announced on Hailwildcats.com on October 15th, 2014

We look forward to seeing you Saturday!

You are cordially invited to hop onboard the HailWildcats.com ‘Road to the Championship’ Fan Bus as we support our team in their quest to have another successful season. Our Fighting Wildcats will travel to Orangeburg, South Carolina (Oliver C. Dawson Stadium) on Saturday October 25th, 2014  to take on South Carolina State University Bulldogs, kickoff at 1:3o p.m.

The bus will make a pickup at the Home Depot on Lee Rd in Orlando at 3:00 am, then depart Daytona Beach at 4:00 a.m., make a pickup in Jacksonville, Fl at 5:30 am, we will stop for breakfast in Georgia, and then arrive at South Carolina St. Oliver C. Dawson Stadium around 11:30 am. We will depart for Florida 30 minutes after the conclusion of the game and make a stop for dinner.

Seats are available on a first come, first serve basis. No seats are guaranteed until final payment has been received. All sales are final!

We encourage the use of PayPal for a fast, safe, and convenient method of securing your seat. We have attached the PayPal links/options below for your convenience. You do NOT need a PayPal account to complete your transaction. If you prefer to pay with cash or with Credit/Debit card in person or over the phone, please coordinate with Jerry Bell or Darold Williams at the numbers below. Checks will NOT be accepted.

Seats are filling up quickly, so be sure to lock yours in today.

DAYTONA BEACH, FL –Bethune Cookman University -4:00 AM   Between the Facilities building and the Band Hall