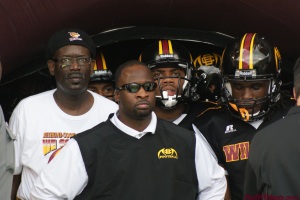 If you want to see Coach Brian Jenkins get upset, ask him about one of his six losses as a Bethune-Cookman’s head football coach.  If you want to see him get really angry, ask him about being passed over for last year’s FCS playoffs.  Chances are the fiery coach will bite down on his bottom-lip, pound his fists, and stare right through you as he passionately talks about what he perceived as a perverse injustice to his squad a year ago.  Coach Jenkins’ remedy in 2012….schedule the best out-of-conference opponents available to beef up the schedule; and “win them all so you won’t have to worry about being passed up”.

The Wildcats will have yet another opportunity to strengthen their 2012 playoff resume when Tennessee State travels to Municipal Stadium on Saturday for the home opener.  The matchup features the #1 and #2 ranked teams in HBCU football.  Saturday’s contest will be the first ever visit for Tennessee State to Daytona Beach for a football contest and the first meeting of the two squads in 25 years.  The teams last met in 1987 when BCU defeated TSU 16-13 in Nashville.

Tennessee State (3-0) enters the contest undefeated with victories over Florida A&M, Jackson State, and Austin Peay respectively.  The Blue Tigers are led on offense by quarterback Michael German.  Last week, German completed 75% of his passes (27 of 36) for 318 yards and two touchdowns.  German’s performance was good enough to earn him Ohio Valley Conference Player of the Week honors.

The TSU offensive line is very experienced featuring 3 players who are All-Conference performers and 4 players who started all 11 games last year.  Tennessee State boast a host of good pass catchers on the outside including University of Florida transfer A.C. Leonard.  However, it is on the defensive side of the ball where the Tigers have been most successful this season.

But before the TSU faithful begin printing up tee-shirts, they should know that the team on the other side of the field is no gracious host.  The Wildcats will be looking to get the sour taste of defeat off their lips and would like nothing more than another dominating performance against an FCS opponent.  BCU ranks 10th nationally in rushing offense (254.3 yards per game) and has scored an average of 32.5 points per game against FCS competition.  The Wildcats’ aggressive defense has them ranked 9th nationally in turnover margin.

Saturday’s contest has all of the makings of a classic showdown.  It should be fun.

Don’t forget about the bands

The Pride vs. The Aristocrats of Bands.  Let’s Go Wildcats vs. I’m So Glad.  The Marching Wildcat’s precision and sound vs. TSU’s song selection and intensity.  There really isn’t much more that needs to be said.  CAN’T WAIT!!!!

Kickoff is scheduled for 4:00 EST.  The game can be viewed live on the Wildcats’ CatEyeNetwork.