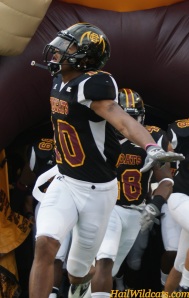 The 34th installment of the Florida Blue Florida Classic between in-state rivals Bethune-Cookman and Florida A&M is upon us. The contest has grown into one of the premier HBCU showcases attracting over one and half million fans since its inception in 1978. The two teams have combined for twelve (12) conference titles during that same timeframe and have created many memorable moments in this annual showdown.

Players and coaches from both teams will look to create their own signature Florida Classic moment when the two teams square off Saturday at 2:00 p.m. in the Citrus Bowl.

Here is a look back at some of the more memorable games played in Florida Classic history.

1978 – Florida A&M trailed BCU 17-0 at halftime in the first ever Florida Classic played in Tampa Stadium. The Rattlers scored 27 unanswered points in the second half en route to a 27-17 victory. Rudy Hubbard’s squad went on to win the first 1-AA (now FCS) National Championship later that season. A year later (1979) BCU won their first Florida Classic 25-20.

1994 – BCU QB Tony Kerrin connected with Morris Nobles on a 2 yard TD reception in the corner of the endzone to give the Wildcats a 27-24 lead with :47 remaining in the contest. BCU went on to win by the same margin and Coach Cy McClairen earned his first victory over the Rattlers as a head coach.

2003 – Daytona Beach native and current Chicago Bear, Eric Weems, scored 3 touchdowns and helped the Wildcats rally from a 28-10 halftime deficit. The final touchdown was set up by a fake punt attempt on 4th and 17 with less than 2:00 remaining in the contest. A FAMU player was flagged for pass interference on the fake punt and BCU was awarded an automatic first down.

Later in the drive quarterback Allen Suber avoided a sack, rolled to his right, and hit Weems who beat triple coverage just beyond the pylon with 9 seconds remaining in the game. BCU prevailed 39-35 in front of the largest crowd (73,358) in Florida Classic history.

2004 – Florida Classic fans were treated to the first overtime in the history of the series. The Wildcats eventually prevailed 58-52.

FAMU’s Ben Dougherty (QB) and Roosevelt Kiser (WR) had career days in that contest. Midway through the third quarter, Dougherty connected with Kiser on a 66 yard TD reception and extended FAMU’s lead to 45-24.

Head coach Alvin Wyatt then made the decision to move eventual three-time All-Pro defensive back Nick Collins from safety to cornerback with the assignment of blanketing Kiser. The move proved to be very effective for the maroon and gold. The FAMU passing game was severely limited as a result of the coaching decision and the Wildcats outscored FAMU 34-7 from that point forward. Rodney Johnson’s 15 yard touchdown run in overtime sealed the victory for BCU.

Coach Wyatt, who was overcome with emotion after the win, fainted and had to be carted off the field by medical personnel. Wyatt was eventually treated for dehydration but was no worse for the wear.

Not only was the 2004 victory the first overtime fame in Florida Classic history, it was also the first time that BCU won three consecutive victories over the FAMU.

2005 – Like the year prior, this game was also decided in overtime; only this time FAMU would emerge as the victor. The Rattlers entered the contest as underdogs and quickly fell behind to the Wildcats 17-0. But A&M slowly climbed back into the contest and forced the game into overtime on the strength of a Wesley Taylor 43-yard field goal with less than 3 minutes remaining in the 4th quarter. Taylor’s 26-yarder in overtime vaulted the Rattlers to a 26-23 win.

2010 – BCU entered the 2010 FC (Brian Jenkins’ first year) with an unblemished 10-0 record. However, a 3rd quarter injury to eventual MEAC Offensive Player of the Year, quarterback Matt Johnson, derailed BCU’s high-octane “Speedway Offense.” FAMU capitalized on the opportunity and secured a 38-27 win in one of the biggest upsets in FC history. Phillip Sylvester scored 3 times for the Rattlers and rushed for 146 yards on 26 carries in the process.