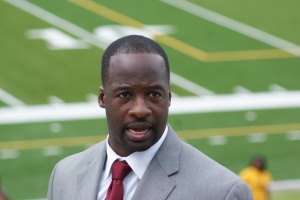 In the two short years that Brian Jenkins has been at the helm of the Bethune-Cookman football team, he has proven two things beyond question:

The third year head coach’s passion was on clear display at Sunday’s Media Day Event when discussing two specific topics: (a) his commitment to develop his players into responsible, productive men; and (b) how much he hates losing.

The Wildcats are 18-5 under coach Jenkins’ leadership and they enter the season ranked as high as 14th nationally in one pre-season publication.  However, Coach Jenkins repeatedly and emphatically stated that “our program is about more than winning football games”.

“I love my guys and I will shout it from the mountain top”.  “We have a program that’s dedicated to building men.  It makes you feel good to know that your program is looked upon nationally for not just your football accomplishments, but for building young people also”.

The Wildcat football program received the FCS ADA Academic Progress Rate (APR) Award for being the Most Improved Mid-Eastern Athletic Conference (MEAC) school after improving to an APR score of 935 during the 2010-11 school year.

Several members of the squad have even already graduated and are enrolled in graduate school.

Coach Jenkins’ fatherly influence extends far beyond the playing field and classrooms of his players; it also reaches into their family lives.

“I’ve got a lot of young father’s on this team.  We often counsel with them and tell them that there is no reason that you should not be there for your child.  You don’t let a team meeting or anything else affect that.  You got a lot of fathers that bring their kids to study hall and team meetings.  We have some ladies that work in our front office who offer babysitting to our guys so they can study and stay on topic”.

True freshmen Ray Martin of Sanford Seminole High School chose BCU over several BCS schools including Ole Miss and West Virginia.  Martin cited the pro-family environment established by Coach Jenkins as one of the primary appeals in his decision to sign with BCU.

“We try to provide a strong family for our team” Coach Jenkins stated.  “Our wives are heavily involved and they try to teach some of our players parenting skills”.

At least two of BCU’s football players are single fathers who have sole custody of their children.

Coach Jenkins said “I am very proud of my guys for taking on their responsibility of being a (single) father in spite of playing a college sport and for maintaining a high level of both. So in my book I’m a grandfather and I couldn’t be more proud of them”.

“I love this team and my players so much.  They are not all angels.  They make mistakes but they don’t make excuses.  They give me all that I ask of them in every aspect”.

Coach Jenkins’ affinity for his players extends to his former players as well.  When asked about the team’s newest graduate assistant, (former BCU QB) Matt Johnson, Coach Jenkins liken him to “a friend that you bring home and feed once but then you can’t get rid of them”.  He went on to praise Matt Johnson’s accomplishments on and off the field namely being named as BCU’s first Jake Gaither award winner in 2010 for his on the field production as well as being recognized by the University as “Business Student of the Year” for his work in the classroom that same year.  He went on to state that Matt Johnson has “walked in the direction that they are trying to get the (current) players to walk in.  He is living what he has learned (as a BCU football player) and he’s done a tremendous job in life and with our quarterbacks”.

The fatherly passion and care that was evident when speaking about his players quickly gave way to the intense and poignant side of BCU’s head ball coach when asked what would define a successful season for his squad.  “Win a national championship!!! Anything less is unacceptable”.

When asked if the Wildcats needed to upgrade their schedule to assist in reaching the goal of winning a national championship since the MEAC has gone so long without winning a playoff game the coach responded: “we do need to do a better job of winning in the playoffs but when you upgrade your schedule and then you have the record that you’re supposed to have, then they find a way to overlook you, is that the MEAC’s fault?  Let’s call it what it is.  People want to talk around it.  There are some teams that have been placed in the playoffs whose schedule is not ‘King Kong’. Of course you want to schedule (FCS) playoff teams (during the regular season), but do they want to do that.  (Sometimes we) make a phone call and they say that they will get back to you, but they never call you back.  What do you do in those situations?  I tell my guys to win them all and you won’t have to worry about it”.

The Wildcats will get their chance to win the first one of the 2012 season when they face off against Alabama State in the MEAC/SWAC Challenge in Orlando on Sunday, September 2nd at 12:00.